Democrats Are The Problem .... Not The solution

As a young man I often believed the democrat rants that lay the onus for many of societies ills at the feet of the Republican party and Republicans, then I grew up. I discovered that many of the supposed crimes that they laid at the feet of Republicans are those which they own all or nearly all the guilt for. A prime example of this among many is the near constant drum beat from democrats directed at the NRA and by proxy the Republican party and Republicans for gun violence. We have all heard the mantra ....the NRA is the reason why there is so much gun violence .... the NRA is the reason why so many of our cities have become shooting galleries. Well the truth of the matter is pretty evident if one cares to look. Gun violence in this country is largely confined to those locations which vote for, support and is populated by .... democrats ....places like Detroit .... Camden ...Philly .... Newark .... Washington D.C. .... Baltimore.....Wilkes Barre .... New Orleans..... the list is a long and bloody one. In all of these places it has been decades since the last Republican was elected as Mayor and in some places they never have.  In short the democrats are blaming their inability to stop killing each other with a mad happy abandon on everyone but themselves and wish ( as usual ) to punish others for their bad behavior. This desire by the democrats to avoid blame or responsibility is not confined to just this issue but can be seen in issues concerning race .... poverty.... war. To demonstrate ....who was it who created every single institution of racism the nation has known since the 1860's ..... who has insisted we spend ever increasing amounts of our national treasure on anti poverty programs ( 20 - 22 trillion to date ) only to see poverty increase..... who has caused or led us into the 5 largest wars this nation has fought....as I said democrats are the problem ...not the solution.

By David Waciski
Headlines that blame a "gun culture" for the high rate of firearm- related homicides in the United States are not too difficult to locate (e.g., here, here, and here). The need to eliminate this "gun culture" is then used as justification for restriction of 2nd Amendment rights. What goes unmentioned about the so-called "gun culture" is its pervasiveness, or lack thereof, throughout our society as a whole. Even a casual reader of local news headlines should not be shocked to learn that firearm-related homicides are more prevalent in some neighborhoods than others. However, what may be shocking is the near exclusivity of firearm-related homicides to a small subset of neighborhoods; neighborhoods that vote predominately for Democrat candidates
http://www.americanthinker.com/2014/01/guns_dont_kill_people_democrats_kill_people.html
Posted by Aggie95 at 10:35 AM No comments:

Its becoming more and more apparent that the democrat party and its supporters have become nothing more than a collection of misfits, felons, refugee's from sanity and ticks on societies ass as a whole. al sharpton has been a waste of space in all likelihood since his birth so it comes as no surprise that we find events like this in his already sordid past.

Posted by Jim Hoft on Thursday, April 10, 2014, 9:16 AM
An FBI video taken in 1983 caught Rev. Al Sharpton purchasing cocaine from an undercover federal agent.
This was before he became an informant for the FBI.
Via Hannity:


The Rev. Al Sharpton may claim he wore a wire for the feds because he had been threatened by the mob — but a new report says he turned rat to save himself after a federal drug sting.
The FBI “flipped” the bombastic reverend after agents confronted him with a surveillance video showing him discussing cocaine with an ­undercover agent, The Smoking Gun Web site said Wednesday.
During that March 1983 conversation, Sharpton wore a cowboy-like hat that was garish even by the rabble-rousing preacher’s 1980s standards.
He later showed up at a Manhattan apartment for another meeting that June with the agent, who was posing as a “former South American druglord seeking to launder money through boxing promotions,” the report said.
Instead, Sharpton was met by G-men who were not undercover — and who showed him the “drug” video, the Web site said, citing a source familiar with Sharpton’s secret FBI file.

Well I would like to say I told you so but I didn't so I can't. I will say however that it doesn't surprise me in the least that she is turning out to be a walking talking poster child for failed expectations. There are several things which I find amusing about this whole affair the first is that while several Republicans were offered these bribes every single one of them turned them down while the democrats stood there with there hands out. Then there was the fact that they were bribing people to vote against the voter I.D. bill while accusing the Republicans of all sort of shady behaviors for wanting voter I.D.  I think I will file this one under rich irony.

Federal prosecutors in Philadelphia never deemed a sting operation that targeted public corruption as too weak to prosecute, according to District Attorney Seth Williams and law enforcement sources familiar with the brief federal review of the investigation.
The sources and Williams say the prosecutors never came to a judgment about the investigation one way or another before the state attorney general asked them to halt their review.
Their statements echo a declaration by the Philadelphia office of the FBI, which said it made no judgment about whether the case was suitable for prosecution.
Pennsylvania Attorney General Kathleen G. Kane has said "federal authorities" endorsed her view that the sting was fatally damaged. She has declined to identity (sic) the federal officials involved, saying they had asked for anonymity.

Chief Justice Castille is the Pa state Supreme Court Justice who decided to delay the implementation of the voter I.D. law. The liberals insist that the law is racist and will reduce turn out at the polls.  Bullshit ... the last state to pass a voter I.D. law saw overall turn out increase as did minority turn out. That state was Georgia. The state of Indiana passed what was called the strictest voter I.D. law in the nation and it to saw turnout increase. The problem the liberals have with the law is it makes cheating just a bit more difficult. In any case he is facing mandatory retirement in 2014 and if re elected will only be able to hold office for less than 14 months.


By Shannon McCaffrey
The Atlanta Journal-Constitution
When Georgia became one of the first states in the nation to demand a photo ID at the ballot box, both sides served up dire predictions. Opponents labeled it a Jim Crow-era tactic that would suppress the minority vote. Supporters insisted it was needed to combat fraud that imperiled the integrity of the elections process.
But both claims were overblown, according to a review of by The Atlanta Journal-Constitution of statewide voting patterns in the five years since the law took effect.
Turnout among black and Hispanic voters increased from 2006 to 2010, dramatically outpacing population growth for those groups over the same period.
http://www.ajc.com/news/news/despite-voter-id-law-minority-turnout-up-in-georgi/nR2bx/
Posted by Aggie95 at 5:41 AM No comments:

Anyone Remember Pelosi Making This Walk

I remember watching this as it happened and thinking what a nasty piece of work she was. She and the rest of the democrats had a good day that day according to their lights. However, if you listen to the tape you can hear how the rest of the folks felt.... KILL THE BILL .....KILL THE BILL. Well now the democrats are upset because we Republicans are gloating over the slow motion growth of the crater that may well become the final resting place of obamacare. Well the democrats passed this without a single Republican vote and then you rubbed it in our faces now its our turn. Its likely that when all is said and done the obamacare website alone is going to cost us over 2 billion for its design and repair and make no mistake the website was and is the easy part of obamacare. Obama and the democrats have lied to us from the beginning and they continue to do so. Its not going to save a family 2500.00, you likely won't keep your health care plan, it is not going to result in a net gain of jobs, its not going to cost 900 billion, the people don't want it, the website didn't crash because of the number of people on the site and the number of people going to the site is not an indicator of how popular it is, just as the number of people who have federal taxes taken out is an indicator of how popular they are in both cases you are forced to ...by law to do so. 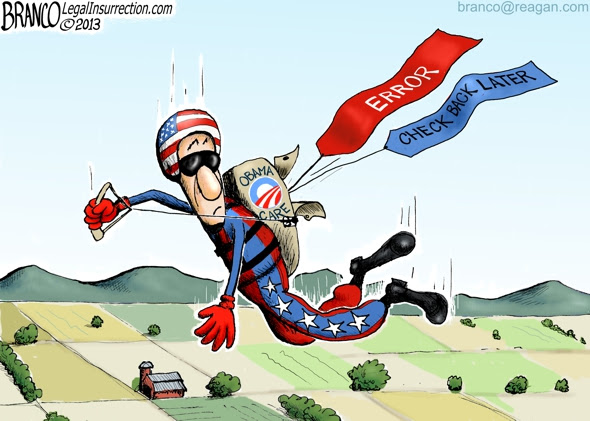 Note: You may reprint this cartoon provided you link back to this source.  To see more Legal Insurrection Branco cartoons, click here. Branco’s page is Cartoonist A.F.Branco
H/T http://legalinsurrection.com/
Posted by Aggie95 at 2:21 PM No comments:

Nevada Health Exchange: A Case Study in What Went Wrong

Report: Only 5 Iowans Have Signed Up for Obamacare

Is Obama locked in a victim mentality?